The latest invention from the Japanese tech giantToshiba is here to help those who feel irritated with the fact that the batteries on their cell phones or iPods always run out. The company presented world’s firstportable fuel-cell that can power various devices on the move. 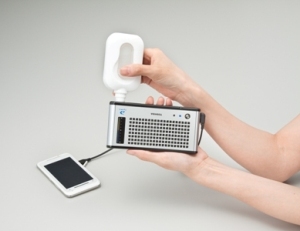 By injecting methanol in the cell, engineers from Toshiba managed to make the fuel-cell produce electricity using a chemical reaction with oxygen. Users will be able to recharge their gadgets using a USB cable.
With various new advanced devices that require more power, battery exhaustion has become the major concern among gadget users.
Toshiba’s latest invention is dubbed Dynario and according to the company, its palm-sized fuel cell“delivers almost instant refuelling that untethers electrical equipment from AC adapters and power outlets.”
Toshiba claims to be one of the leading companies in the field of fuel-cell for portable gadgets development. It says that one refill of methanol from a special cartridge can produce enough power to recharge two cell phones, reports The Independent.
Soon 3,000 portable fuel-cells will be put up for sale in Japan. They will be available on the company’s direct-order website at an initial price of 29,800 yen ($326 dollars) each. A set of five fuel cartridges will cost 3,150 yen ($34).
From Physics Great site infoniac.com
Eco-Friendly Car that Can Be Powered by Different Alternative Fuels
Structure that Triples the Power of Wind Turbines