The
from scientists at the Lund University in Swedenand Scuola Superiore Sant’Anna in Italy is called the Smart Hand. The device is a new type of prosthesis hand that can really offer a sense of touch. It features four motors and 40 sensors developed to offer the hand practical motion as well as allow the person to actually feel the object that the robotic hand touches. 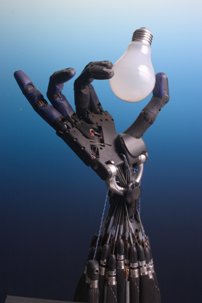 It is worth mentioning that the Smart Hand is the world’s first gadget of its kind that is able to transmit signals back to the brain, thus providing the user the sense of touch. The device takes advantage of the so-called phantom limb syndrome, which refers to the feeling experienced by the amputees who have the sensation of their missing body being still in its place.
Researchers use the signals that come from the brain and go through neurons to the site, where the amputation has taken place, and direct them to the mechanical part of the Smart Hand, reports BBC. The sensors included in the mechanical hand are connected to the nerve endings found at the base of the arm, thus patients are able to feel and take control of the device.
Surely this latest invention is yet too far from becoming a device that works as a normal hand, mainly because there are millions of nerves within a real hand. Researchers worked about ten years on the Smart Hand project. The team collaborated with scientists from Denmark, Israel, Ireland, and Iceland. In the near future the mechanical hand is expected to have some great improvements. In fact, some researchers believe that over the next decade people will be able to use prostheses that would look much like their biological analogues. Below you can see the video of a patient testing the device.
Spherical Generator Produces Solar and Wind Power
Latest Invention: EyeHear – Device that Projects Spoken Words on Glasses