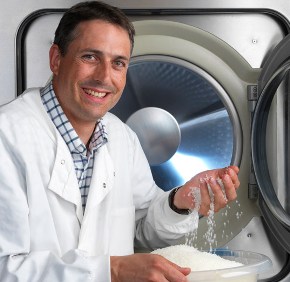 British company Xeros looks forward to conquer the American market with its latest invention, a new washing system able to save a lot of water using nylon beads. The beads tumble wash clothes using 90 percent less water than traditional washers.
In addition, the company’s latest invention, which is currently in the development stage, requires less detergent. Xeros claims that there would be no need for tumble drying and if the homes in the United States would switch to the new system, the emissions of carbon dioxide would be considerably reduced. The result would be as though 5 million vehicles have been removed from the road. The company also says that the new washing machine will save 1.2 billion tons of water each year, which equals 17 million swimming pools.
The washing machines does its job using small nylon beads that eliminate stains off clothes and lock them into the molecular structure of the nylon. The beads can be used for hundreds of washes and afterwards they can be easily recycled. The technology behind the new washing machine is the result of a research carried out at the University of Leeds. It has been used in a concept washing machine by the Cambridge Consultants.
After carrying out tests for over three years, Xeros, a spinout from the University, managed to achieve an agreement with Kansas City-based GreenEarth Cleaning, which intends to market Xeros’ latest invention across North American continent in 2010. You can read more about the product on the company’s website .