Scientists at Aberystwyth University and theUniversity of Cambridge in the UK managed to create world’s first robot that can carry out its own experiments, produce hypotheses as well as make scientific discoveries. Researchers dubbed their latest invention Adam. 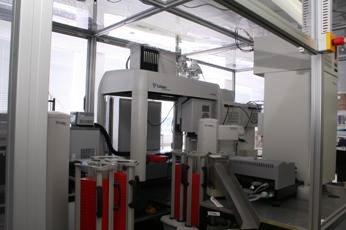 Working on its own, the robot-scientist already managed to find new functions for several genes of Saccharomyces cerevisiae, also known as brewer’s yeast.
The lead-researcher of the project is Ross King, a computational biologist at Aberystwyth. He says that up till now Adam made modest findings, but all the discoveries were real. Their latest invention consists of a room equipped with different laboratory instruments. It includes 4 personal computers that work as one brain. In addition, Adam has robot arms, a number of cameras, liquid handlers, incubators and more.
Performing the Experiment
Scientists gave their latest invention a freezer with a collection of mutant strains of yeast where individual genes were deleted. The robot was also provided with a database that contained information on the yeast genes, enzymes and metabolism, as well as a supply of hundreds of metabolites.
In order to find which genes coded for which enzymes, the robot cultured mutant yeast that had a specific gene deleted. Then it analyzed the way mutant grew without a certain metabolite. In case the strain was spotted to grow not very well, Adam registered new information about the function of the deleted gene.
It is worth mentioning that Adam is able to perform over 1,000 similar experiments daily. So far, the robot came up with and tested 20 hypotheses about the coding of genes for 13 enzymes, from which 12 were confirmed by researchers, who carried out their own experiments.
sourec:http://www.infoniac.com
Human-Like Robots to Mimic Human Facial Expressions
Electrodes turn your eyelids into 3D shutter glasses