The latest invention of a Somerset engineer literally breaks the laws of physics. Dubbed the Alpha Omega Galaxy Freefall Generator, the device can produce free energy from perpetual motion, thus generating more power than it consumes.
Another interesting fact is that the inventor built his latest invention from bicycle parts. He also used awindscreen-washer motor. In the end the engineers obtained a machine that consists of a series of flywheels with high-powered magnets that allows it to generate power from gravity.
Although the device may seem rather heavy to be moved by the washer motor, making use of a rubber band that was cut from a bicycle inner tube, the magnets along with the special design of the flywheels allow it to move. 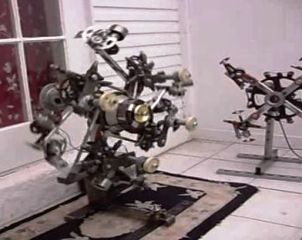 It would be interesting to note that the magnitude of the energy produced by the Alpha Omega Galaxy Freefall Generator is so much that if the inventor launches its commercial version (which would be the size of a standard washing machine), the machine could generate enough electricity to run a house. Hence theflywheel becomes its own source of electricity but with a slight amount of external input that is needed to turn on the machine.
The inventor will not be able to fully patent the Alpha Omega Galaxy Freefall Generator. He will only be able to patent certain parts of the machine. This is because the device claims to be a perpetual motion machine that generates more power than it uses. Thus the device breaks the first law of thermodynamics, which, in its simplest form, states that neither matter nor energy can be created or destroyed. Energy can be changed, moved, controlled, stored, or dissipated, but it cannot be produced from nothing or reduced to nothing.
source:http://www.infoniac.com/hi-tech/latest-invention-perpetual-motion-device-that-produces-power-from-gravity.html

One thought on “Latest Invention: Perpetual Motion Device that Produces Power from Gravity”