In 2008 scientists managed to invent the first robotic exoskeleton. A number of these devices have already been sold. One of the most advanced robotic exoskeleton was the full-body HAL robotic suit, which represented the latest invention of the Japanese companyCyberdyne.
Though several robotic exoskeletons went on sale, the technology still remains far from mature. The majority of strength-boosting suits use electrodes in order to estimate the electrical activity in the muscles of an individual. The gained data is used to make sure that the suit indeed helps a person by moving in the same direction but with greater power.
According to the officials from Cyberdyne, HAL is able to increase the strength of a person by two to ten times. However, this system may have certain problems related to the calculation and translation of electrical activity in a person’s muscles. This mainly refers to the confusing electrical signals provided by several muscles moving simultaneously in one part of the human body.
Currently the Japanese company Honda started the development of its own robotic exoskeletons, in which it applies a different approach. The firm created some prototype suits in which the system is able to sense the force and speed of a limb in motion and then try to match it with the movement of the device, applying the required strength. This approach resembles the technique used in power steering cars, in which special sensors identify the movement of the steering wheel and interpret that to the wheels with the help of servos. Honda’s idea is already applied in the exoskeleton presented in the video. The device was developed with the goal of helping weakened people walk and crouch. The sensors, located in shoes, identify the motions of the wearer and help the system take part of the weight. 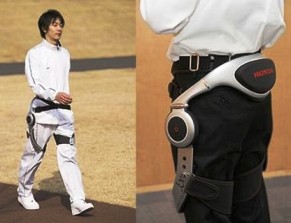 One thought on “Latest Invention – New Exoskeleton from Honda”