According to a Japanese scientist, he managed to create a “hummingbird robot” able to flutter around in the air by using a fast wing motions. The robot has almost the size of a real hummingbird. It features micro motor and 4 wings that flap at a speed of 30 times per second. 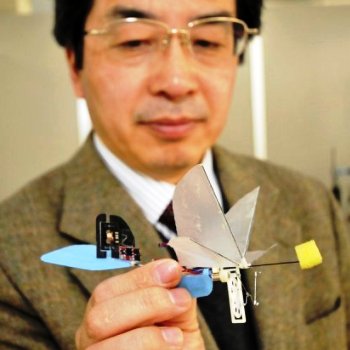 Hiroshi Liu, the 46-year-old scientist who works at Chiba University east of Tokyo and specializes in creating robots based on real creatures says that his latest inventionsis able to turn up, down, left or right by making use on a special infrared sensor. The robot weights only 2.6 grams.
Liu says that the robot can fly in a figure of 8 more stably than a real helicopter. He mentioned that he further plans to make his latest invention float at one point in mid-air. In addition, the researcher looks forward to mount a microcamera on the robot by March 2011, reports Physorg.com.
Though little, the robot has cost Liu a stunning 200 million yen ($2.1 million). It could be used for various purposes like rescuing people from ruins, looking for criminals and even serving as a probe vehicle on the red planet. “First, we need to learn about effective mechanism from natural life forms, but we want to develop something to go beyond nature eventually,” said the scientist.