British scientists at the University of Bristol developed a copycat robotic head, dubbed Jules. The head is able to mimic the facial expressions and lip motions of a human.
The robotic Jules represents an animatronic head developed by David Hanson, American specialist in robotics, who works on the creation of uniquely expressive, incorporeal heads made of flexible rubber skin which moves with the help of 34 servo motors. 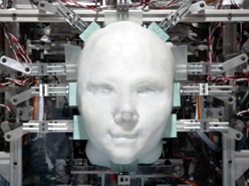 The motions of a human face are monitored by a video cameraand mapped onto small electronic motors in the skin of the robotic head. The group of scientists at Bristol developed their own software that will help pass the expressions, which the video camera recorded, into commands, thus making servos generate facial motions that are similar to the real ones. But due to the fact that the robot’s motors cannot be compared to the real human facial muscles, a little artistic license was needed.
The scientists hired an actor, who performed on camera different expressions, such as happiness for example. Afterwards an animator chose ten frames showing a variety of facial expressions and set by hand the servos in the face of the robotic head to match. Such training scientists applied in order to develop software which would be able to transfer what it observes on video into similar settings of facial motors of Jules. The robotic head is thus able to mimic faces in real time at a speed of 25 frames per second, reports NewScientist.
The developers of Jules tried to make it look more realistic than its ancestors, such as the Kismet robot created by American scientists at MIT that had a mechanical metal face.
“We are really attuned to how a face moves, and if it’s slightly wrong, it gives us a feeling that the head is somehow creepy,” said Neill Campbell, the lead researcher.
“Research has shown that if you have a robot that has many human-like features, then people might actually react negatively towards it,” said Kerstin Dautenhahn, a scientist activating in the field of robotics at the University of Hertfordshire in the UK.
According to Campbell, making a robot look more like human could have its advantages. When people communicate with each other they use a lot of facial expressions and those robots that would be able to mimic them, could be used in a variety of ways, such as, for instance, nursing homes.
Nevertheless Dautenhahn has doubts regarding the ethical implications of exploiting robots that look like humans for more than just entertainment. He considers that children or elderly people could mistake a human-like robot for a real person, which could lead to the development of a social relationship. Vulnerable people might think that, besides acting and looking like a human, the robot can feel like a real person.
Latest Invention: Hummingbird Robot Created by Japanese Scientist
Latest Invention: Robot that Makes Discoveries on Its Own